By emilybruton on September 24, 2012 in Uncategorized

One of the hardest decisions in setting up a masters exhibition is deciding what work to put in and what to leave out. Because much of my work has been revolved around amassing photos, texts and found objects I had to make some tough decisions.

With a week to go I made my decision for which major pieces I am leaving out and putting in. And some of my favourite work, like ‘The hoover and chair’ photo along with my ‘Red balloon’ video were left out. The decision was based on a number of factors. Before building my wall I had some chats with my tutors and I decided it was best to split my space in two. One room for found objects displayed in a rather archival way. And the second room for some of my bigger projects. Certain sites I have come across had a profound effect on me for their personal and contemplative nature. I decided the work that meant the most to me was the writing on the Dublin wall. 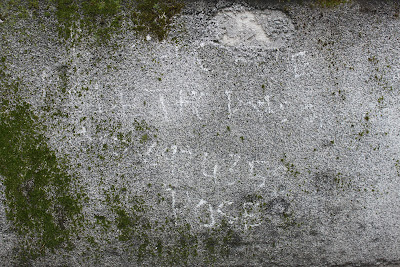 I also felt if I wanted to show this piece it needed its own space. I liked the idea of turning it into a sort of monument. When I printed the photo out and blew up to the actual size of the wall it began to look like a sculpture rather than a photo. Many commented on it, initially thinking it was a piece of slate rather than a photo. This is something that fascinated me and I decided to allow it to have as much space around it as possible and give it a monumental feel, something that contrasted its original location in Dublin. Much of my interest has revolved around the idea of the everyday and mundane containing the monumental and heroic in understated ways.

I felt if I introduced a video or projection to the room it would interrupt and affect the photo. This meant of course leaving out art works that I had originally intended to present at the final show.

I think the most important way to look at this final show is that its simply an exhibition. Perhaps a bigger one than most but its an exhibition and not a retrospective. As tempting as it was to show everything I had done this year it wouldn’t have led to a cohesive and thoughtful exhibition. Its always hard to know when you are staring at your own work for months on end, it can become difficult to know what works and what doesn’t.

We took part in a lot of exhibitions this year, and many were rushed, a lot of people didn’t like this, me included, but it meant we made some instinctive and intuitive decisions. Sometimes it doesn’t always work but the problem with having a long time to decide is that your intuitive side gets blurred because you have been staring at your work for far too long. This is always going to be a worry with a big show. I hope I have made the right decisions but with art sometimes you will never know!